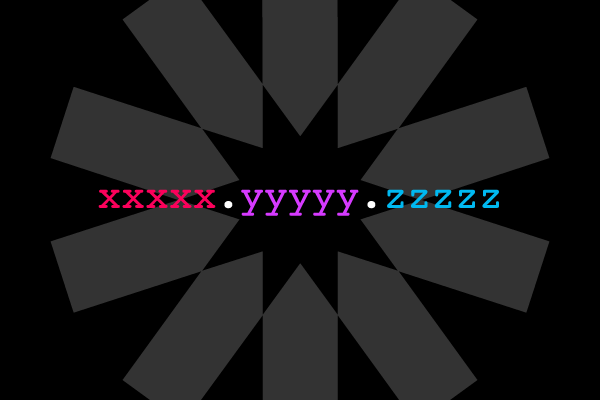 JWT is becoming more popular for securing APIs. But what is JWT exactly? And how does it work?

That's what we break down in this blog.

JWT, or JSON Web Token, is an open standard used to share security information between two parties — a client and a server. Each JWT contains encoded JSON objects, including a set of claims. JWTs are signed using a cryptographic algorithm to ensure that the claims cannot be altered after the token is issued.

For beginning developers, JSON stands for JavaScript Object Notation and is a text-based format for transmitting data across web applications. It stores information in an easy-to-access manner, both for developers and computers. It can be used as a data format by any programming language and is quickly becoming the preferred syntax for APIs, surpassing XML.

Now that you understand JSON as a data text format, you may be wondering What are tokens? To put it simply, a token is a string of data that represents something else, such as an identity. In the case of authentication, a non-JWT based token is a string of characters that allow the receiver to validate the sender’s identity. The important distinction here is lack of meaning within the characters themselves.

Explore additional resources on security and beyond.

JWTs differ from other web tokens in that they contain a set of claims. Claims are used to transmit information between two parties. What these claims are depends on the use case at hand. For example, a claim may assert who issued the token, how long it is valid for, or what permissions the client has been granted.

A JWT is a string made up of three parts, separated by dots (.), and serialized using base64. In the most common serialization format, compact serialization, the JWT looks something like this: xxxxx.yyyyy.zzzzz.

Once decoded, you will get two JSON strings:

The JOSE (JSON Object Signing and Encryption) header contains the type of token — JWT in this case — and the signing algorithm.

The payload contains the claims. This is displayed as a JSON string, usually containing no more than a dozen fields to keep the JWT compact. This information is typically used by the server to verify that the user has permission to perform the action they are requesting.

There are no mandatory claims for a JWT, but overlaying standards may make claims mandatory. For example, when using JWT as bearer access token under OAuth2.0, iss, sub, aud, and exp must be present. some are more common than others.

A common way to use JWTs is as OAuth bearer tokens. In this example, an authorization server creates a JWT at the request of a client and signs it so that it cannot be altered by any other party. The client will then send this JWT with its request to a REST API. The REST API will verify that the JWT’s signature matches its payload and header to determine that the JWT is valid. When the REST API has verified the JWT, it can use the claims to either grant or deny the client’s request.

In simpler terms, you can think of a JWT bearer token as an identity badge to get into a secured building. The badge comes with special permissions (the claims); that is, it may grant access to only select areas of the building. The authorization server in this analogy is the reception desk — or the issuer of the badge. And to verify that the badge is valid, the company logo is printed on it, similar to the signature of the JWT. If the badge holder attempts to access a restricted area, the permissions on the badge determine whether or not they can access the area, similar to the claims in a JWT.

In short, JWTs are used as a secure way to authenticate users and share information.

Typically, a private key, or secret, is used by the issuer to sign the JWT. The receiver of the JWT will verify the signature to ensure that the token hasn’t been altered after it was signed by the issuer. It is difficult for unauthenticated sources to guess the signing key and attempt to change the claims within the JWT.

Because of this, the server does not need to keep a database with the information needed to identify the user. For developers, this is great news — the server that issues the JWT and the server that validates it do not have to be the same.

When it comes to APIs, JWTs are the standard. They offer a compact and safe method of information exchange without the need for a centralized token database.

Now that you have answers to what is JWT? and what are tokens?, you can create more secure APIs.

And the best way to create secure APIs is to use the Akana API platform.

Akana automates security and makes it easy to apply JWT and OAuth, among other policies. This helps you ensure that your backend data is secure. And Akana helps you avoid the risk of an API attack.

See for yourself how Akana can help you ensure security and accelerate time-to-market. Watch an on-demand demo to learn more.